There it is: a wicked problem.

You have a chance to dig deep, research, analyze, and discover new methods for aseptic presentation. You’re working with some of the smartest engineering and end-user sterilization and packaging professionals in the industry. You have a chance to develop the most effective and safe methodologies for aseptic presentation that would reduce Hospital Acquired Infections (HAI) and lead to improved patient care.

That’s exactly where a group of 25 professionals found themselves in 2019. And that’s when Sarah Rosenblum, PCL’s Senior Director of Sales and Marketing, volunteered for the newly-formed Kilmer innovations in Packaging (KiiP) committee, whose focus is to provide research and findings that improve processes and practices in aseptic packaging. She was selected to co-lead a research topic with Malinda Elammari, Clinical Education Specialist at Healthmark Industries.

Sarah and Malinda knew their topic was challenging; ISO 11607 regulations are vague and bridging the gap between engineers and end users is difficult. The KiiP committee’s goal was to correct regulatory vagueness. “We had from 2019 to 2022 to make a difference in the aseptic presentation space,” says Sarah. “We are one of the largest groups within the KiiP organization, which speaks to the importance of the topic. Our group consisted of people working in everything from material suppliers, medical device manufacturers (MD&M’s), clinicians, end users, nurses, and surgeons.”

They recently provided their story of research, surveys, and observations at the 2022 Kilmer Conference, which is held every three years. This year’s theme was Continuity: Fostering Our Future and the location was in Greece.

The conference presentation cadence is fast: speakers have 20 minutes to discuss data and findings on complex sterilization and packaging topics. Sarah and Melinda’s topic was pegged for the Real World vs. Worse Case track: “Is this the Real World?  Questioning Aseptic Presentation Through Observation.”

Back to 2019 and the research. The group initially developed a problem statement: “There is a lack of scientific data, which prevents one method of aseptic presentation/aseptic opening in the hospital arena from being defined as better than another. This leaves room for human interpretation and a lack of understanding surrounding the overarching concept of aseptic presentation.”

Their first idea was to develop a survey to address the vagueness of the ISO 11607 language. A group of engineers started to tackle the vagueness and thought the root of the problem was unclear language. So, they thought the solution was to “change the world through documentation,” says Sarah.

What we were doing was the root of the problem; instead of looking at it holistically, we became a siloed group of engineers focused on fixing the verbiage in the documentation.”

By May 2021, the group determined their language solution was a failure. They realized they needed to see what was going on in the real world.

The group wrestled with a paradox: Who should have more say? The engineer who’s designing the package or the end user who handles the packaging every day as part of their job. Either way, a patient could die if the packaging was inadequate or improperly opened. Both are major burdens, she said.

“We realized that defining aseptic presentation and moving the needle forward involved a lot of parties,” Sarah says. “At this point, you have different folks that have different motivations. We identified end users who need training in the field, in school, and through organizations. And then you have engineers who have their packaging, engineering, schooling, and are following standards, such as ISO 11607. We identified two competing parties that have two very different thoughts about what to find proper in aseptic opening. This was a big moment of clarity.”

The group created an observation document to keep their real-world experiences quantitative and factored in specific variables. They spent from October 2021 until the Kilmer conference doing field research to see how people interact with packaging in the real world. They conducted 80 observations across eight U.S. states.

The observations were conducted by a member of the committee and used a standard list of four questions:

Overall, the sample sizes for corner peel and header style pouches were insignificant to derive any insights, but the blister was, on average, far easier for the clinicians to open than the chevron style pouches.

Out of all the aseptic opening methods they observed, Dumping/Splitting was the most frequently seen technique, accounting for 55 percent of observations. Next was the Picking method, accounting for 26.7 percent, then Flipping Method at 10 percent, and lastly Controlled Method at 8.3 percent.

Within the Chevron style pouch category, they most frequently saw the Dumping/Splitting method, which accounted for 52.4 percent of their observations, followed by Picking at 26.2 percent, Controlled Method at 11.9 percent, and lastly, Flipping method at 9.5 percent of observations.

Within the Blister style pouch category, they most frequently saw the Dumping/Splitting method with 66.6 percent, followed by Picking at 33.3 percent. The Flipping and Controlled methods were never observed as a technique when they were observing clinicians and blister-style pouches.

During the Kilmer presentation, Melinda demonstrated all four methods of opening.

“Within all of this data, one thing became very clear,” says Sarah. “We identified that clinician training and packaging engineer’s designs are sometimes completely different and don’t consider each other whatsoever. We’ve only scratched the surface of the questions that need to be addressed.”

This was the first year the KiiP group was involved at the Kilmer conference, and several of their abstracts were accepted. “We’re looking forward to continuing the discussion and look forward to a possible follow-up session in three years.”

Many thanks to all the KiiP volunteers on this topic: 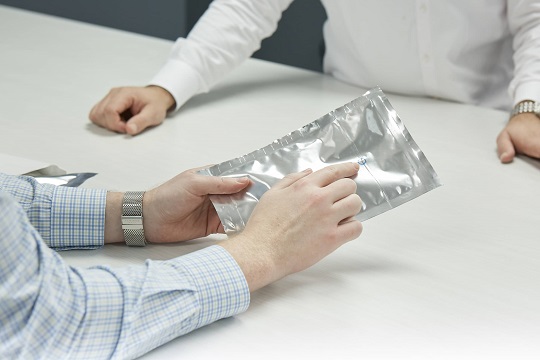 From Lab Tech to Director of Operations in 5 Years