EO (ethylene oxide) is the most common sterilization method for porous medical device packaging. The primary concern with EO is that it is a carcinogenic gas and if it is not disposed of appropriately, it can cause serious health concerns for those who live near the sterilization facility. Due to one major EO sterilizer shutting down, the FDA has posed two innovation challenges to encourage contract sterilizers to develop safer alternatives than EO. The first challenge is focused on identifying alternatives to EO sterilization methods.

The FDA received 24 applications from companies of various sizes to partake in this challenge and narrowed it down to 5 submissions:

The participants that were selected will work directly with the FDA to accelerate the development and review of innovative technology. The goal of this challenge is to identify safe and effective means of sterilization. This blog will explain each of the ethylene oxide sterilization alternatives that are being explored!

Supercritical Carbon Dioxide, or scCO2, is carbon dioxide that is in a fluid state when its temperature and pressure are equal to or greater than the critical point. scCO2 is non-toxic, is generally safe for the environment, and is a powerful solvent. This sterilization method gets up to a temperature of 50°C.

The properties of scCO2, (its solvency, gas-like viscosity, diffusivity, etc) help facilitate the penetration of CO2 to the interior or dense products like bone tissue.

Nitrogen dioxide sterilization is a low-temperature (10°C – 30°C) method that addresses challenges that come with traditional sterilization methods. NO2 is a true gas. Noxilizer sterilant residue is a non-carcinogenic, non-cytotoxic, and non-teratogenic. Sterilized packages can be handled by humans directly after the cycle.

NO2 is a surface sterilant, therefore, NO2 can sterilize pre-filled syringes, while maintaining drug integrity, and medical devices with complex geometry.

NO2 aerates rapidly. The rapid aeration process results in fewer residues on the product and packaging.

NO2 is effective against many microorganisms and is compatible with commonly used sterile barrier packaging. However, it is not compatible with cellulosic materials such as paper or paperboard.

Vaporized hydrogen peroxide (VHP) is a deep vacuum, low-temperature (28°C to 40°C) vapor process that has traditionally been used for sterilization of reusable medical devices in inpatient care facilities. VHP is a specially formulated, stabilized, high-purity, aqueous hydrogen peroxide solution. Liquid H2O2 gets converted into vapor, vapor fills the chamber, and then the vapor sterilizes the device.

VHP is compatible with a large range of polymeric materials, making it a great sterilization method for single-use healthcare products.

Once the packages are done being sterilized, the vapor is vacuumed from the chamber and safely converted into water and oxygen. It has low residual levels and has no known oxidation or discoloration effects.

Ozone (O3) has been used as a drinking water disinfectant for years. Ozone is created when O2 is energized and split into two monatomic (O1) molecules. The monatomic oxygen molecules then collide with each other to form O3. The third oxygen atom is loosely bonded and is available to attach to and oxidize, other molecules. The additional oxygen atom makes ozone a powerful oxidant that destroys microorganisms but is highly stable.

Vaporized Hydrogen peroxide and Ozone (H2O2, O3) is a multiphase process that first uses VHP and then is followed by Ozone. VHP is the primary sterilant, with ozone added to the sterilization chamber to reduce residual H2O2.

Questions about your medical device sterilization validation? Contact us today to have a conversation with one of our skilled medical device packaging engineers! 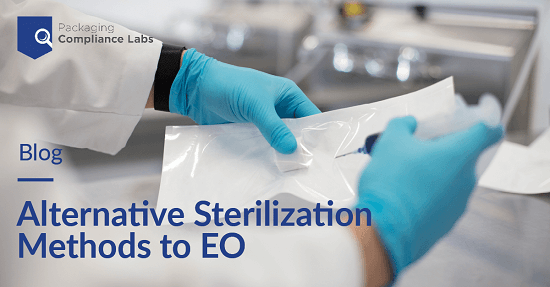 How One Word Changes a Standard