Recently, a PCL client checked in after experiencing a packaging failure in a Tyvek/film pouch.  The failure was consistent in its presentation: pinholes in the corner of the pouches.  At an impasse, the client did not want to waste any more time or money.  It was our turn to get to work.

The Packaging Failure Cause

After replicating the defect, we found that the packaging failure was caused by hazards in the  shipping environment.

We planned a two-part study comparing five new shipping alternatives to the control group.  We were able to start right away, by sourcing materials for the study in just two days.

The first part of the test used a DOE comparing shipping alternatives and the control group. We put the samples through 1.5x ASTM D4169 (Assurance Level 1, Schedules A, F, A).  We ran the samples through a transit simulation. Next, the packages were opened and each pouch was subjected to a bubble leak test to assess sterile barrier integrity. If any failures occurred, then that shipping alternative was eliminated from consideration.

The second part was a confirmation study. This process started with the optimal shipping configuration from the first part of the test, using a sample size of N = 30. The packages were sent through normal transit testing sequences of ASTM D4169 (Assurance Level 1, DC13 Schedules A,F,E,A). After the transit simulation, the packages were opened and the pouches were again subjected to a bubble leak test.  No failures were found. This result confirmed the identified packaging alternative as the best choice.

After providing material numbers, supplier information and box drawings to the client, their impasse was over and they were ready to forge ahead. By tackling the issue in a single week, we were able to save our client the stress of dealing with ongoing packaging failures; problem solved!

Facing a packaging failure? Contact us or live chat with an engineer. Or request a quote if you are ready. 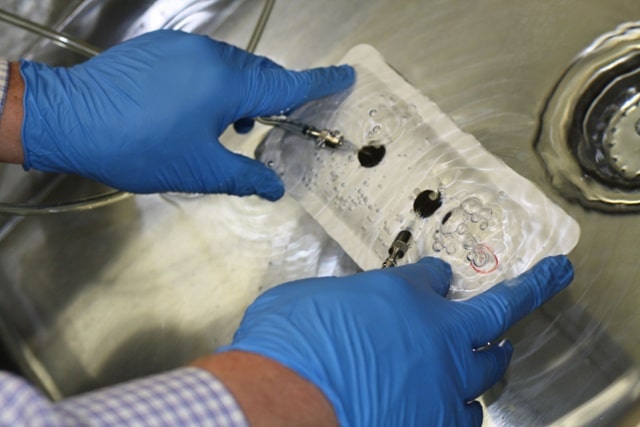 Protected: If There’s A Problem, Yo We’ll Solve It!